Chicago to Köln/Duisburg By Nina Moeller

Working with PKF Fasselt Schlage in both their Köln and Duisburg offices has overall been an enjoyable, eye-opening, experience. PKF Mueller has a successful track record of sending employees on Secondment to Germany and after meeting with Wolfgang van Kerkom, Partner of PKF Fasslet Schlage in Köln while he was visiting Chicago, I felt that this was an opportunity that I should not let pass me by.

While working with PKF Fasselt Schlage in their Köln office, I had the chance to work in the departments of audit and corporate finance. Although to this day I rely heavily on translating websites, I was very pleased to find out that German HGB audits for the most part operate very similar to US GAAP audits. Back in Chicago, I regularly work on audits so starting off in the audit department in Köln only made the transition easier. After three weeks I switched over to their corporate finance department, where I assisted on a transaction services project. I consistently am trying to look at things from a different perspective and I feel that analyzing data from a non-audit perspective introduced me to some new ways of thinking. Near the halfway mark of my Secondment was the 2nd annual US-German Summit in Hamburg. I am grateful to have had the opportunity to attend, present on my experience and network with PKF members from the US, Germany and various other countries. After being away from home for about 5 weeks or so, it was also nice to see some familiar faces from PKF Mueller, who were also in attendance. Finally during the last month of my exchange I worked out of PKF Fasselt Schlage’s Duisburg office (aside from a few days visiting PKF’s office in Frankfurt and working with PKF International). There I got to assist various departments with my knowledge of the English language and US GAAP. I also held presentations on both the path to becoming a CPA and working in the United States as well as a key differences between US GAAP and German HGB.

Living in Köln has introduced me to both German culture as well as “city life”. When asked where I am from, I usually default to saying that I am from Chicago when in reality I live about 40 miles outside of the city. I grew up in the suburbs of Chicago and my University was about 2-3 hours south of the city surrounded by cornfields, so up until now living in a city was just a dream. 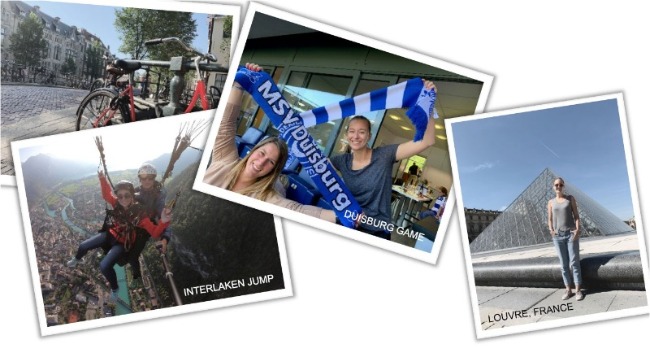 PKF International Limited administers a family of legally independent firms and does not accept any responsibility or liability for the actions or inactions of any individual member or correspondent firm or firms.

The array of attractions, restaurants and shopping that were within walking distance is something I will miss greatly when I am back home. And as much as I enjoy driving my VW Bug back in Illinois, not sitting in traffic at any point during the past three months has been a perk in itself.

Outside of work, my PKF colleagues went out of their way to include me in events (both PKF and non-PKF sanctioned). Whether it was barbecues, grabbing drinks after work, shopping at flea markets, movie nights, soccer games or parties, members of PKF succeeded in making sure that I felt like I was a part of their family. Twice a week, I also attended night classes where I studied basic German. Although the language barrier was slightly difficult for me at times, I feel like I am leaving Germany with an, albeit slightly, better understanding of the German language than I did when I first arrived.
While overseas, I also had the opportunity for some personal travel including Berlin, Amsterdam, France, Switzerland and Ireland. And like many of the PKF Mueller Secondees before me, towards the end of my Secondment I was able to partake in the Oktoberfest celebrations in Munich. Going on Secondment has opened doors for me professionally and exposed me to a wide variety of European cultures through experiences that I will remember for a long time.

The opportunity to participate in a Secondment has allowed me to grow both professionally and personally. To PKF Mueller, PKF Fasselt Schlage, the PKF Network and to all who made my three-month exchange possible, I would like to say thank you for this opportunity. I plan to stay connected with my PKF colleagues once I have returned to back home to Chicago. One of the focuses of my Secondment with PKF Fasselt Schlage was to strengthen collaboration between the firms by building connections so that members of PKF Fasselt Schlage have someone they can feel comfortable contacting with US GAAP specific-questions and vice versa.